When he attempted to walk through the corridor formed by the moving film, he was stopped about half way through by an “invisible wall.” He could lean all his weight forward but was unable to pass.

Giving Land Back to the Flooding Mississippi River

In times like these, I can’t help but think that we might have lots to learn from the Dutch, who have probably know the most about how to live with water. Four years ago, Dutch authorities came up with a water management plan called “Room for the River.” Reversing generations of water control convention, the Dutch decided that rather than battle rivers with expensive dikes and levees and canals, they’d give rivers more room to flow freely.

Rounded-rectangular profile. Flat black top and bottom segments, separated by a band of metal which has vertical lines throughout. Rounded-rectangle cutout on the long face for a card.

Where have I seen this industrial design before? 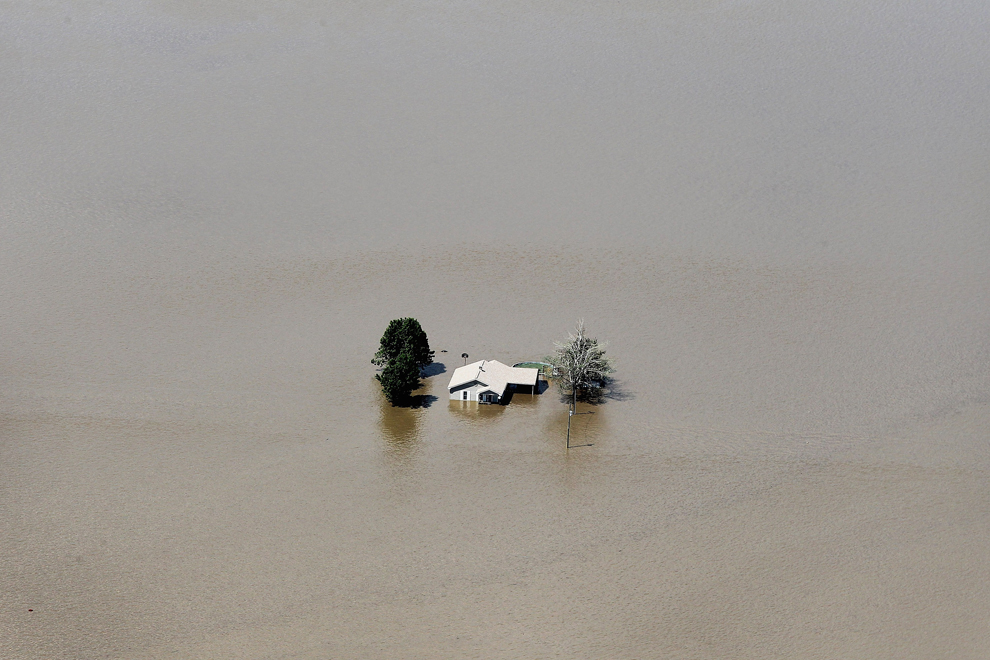 The benefit of postponing short-term satisfaction in exchange for long-term success.

From This Is My Next’s hands-on with the new Galaxy Tab 10.1:

Google’s handing out Samsung’s brand new Honeycomb-powered Galaxy Tab 10.1 like candy here at I/O 2011 today, a tablet that’s slated for general availability early next month. […] A quick glance at the app drawer reveals a fairly stock load, too, though there’s an early build of Samsung Apps (currently loaded with nothing but garbage test content), Samsung’s Music Hub app (which we couldn’t get to open without throwing an error), […]

From the Honeycomb 3.1 announcement:

Android 3.1 tablets will support “a ridiculous number of input devices” and they even showed an Xbox 360 controller hooked up to a tablet, although it didn’t seem to work.

And the official screenshot released with the announcement (check out the icons and text vs. the light background): Also, Google announced a coalition of companies to try to address the Android orphan device/fragmentation/lack of updates issue:

Of course, we’re aslo curious about a few things: do these partners get early access to Android source, which has been the source of some controversy in recent months? If so, where does that leave companies like Dell, which is notably absent from the list? And exactly how many updates are required in that 18-month period? Every update Google releases, or just major ones? We’ll look for more answers and let you know what we find out.

We just asked Andy Rubin how the 18-month update commitment will work in light of every manufacturer’s customizations […]. They’re “actively thinking it out right now” with the partners that have been announced — they’ve been “tasked with figuring out how to make it work.”

All this is just from today. Google held a massive conference where they showed off new products, yet they’re broken, in-progress, coming soon or buggy.

In iTunes […] go to File and create a New Smart Playlist. Set only one rule: Kind contains Purchased AAC audio file That oughta do it. Now listen to nought but this playlist for a while. How does it feel? Does it feel a bit weird? Are you weirded out right now?

I was writing a similar post this morning, but was saved the trouble by this much-shorter, still-excellent post. The (still hypothetical) iTunes cloud service is a complicated beast.

Marketers of the Apocalypse

The billboards carry a stark message on a sunset backdrop: Judgment Day is coming May 21, 2011.

I have that day off work. Should be a blast.

A fringe U.S. evangelical Christian group says it has erected some 2,000 ads around the world, including in 17 Canadian cities, advising of the Second Coming and salvation for true believers. Everyone else, it warns, will suffer a powerful earthquake and five months of hell on earth.

The warning is the latest in a long list of apocalyptic dates red-circled by extremist religious organizations.

Mr. Camping has been wrong before. He wrote a book predicting the world would end in 1994.

Well, Kurt Cobain did die that year. I guess that counts for something.

Google Wave was an idea with the lofty goal of trying to replace email, that didn’t work out so well for them.

Google Wave’s premise wasn’t “let’s replace email”, but rather “let’s replace email for a specific task”. This is the same case with Facebook and Twitter (though the latter only to a certain extent). Google Wave was designed to allow easier collaboration than email can provide, but had a major flaw: it was invite-only, and invitations were a rare and hot commodity. It was a social experience that lacked the “social” aspect.

If [Twitter and Facebook] were in charge when email services were a hot commodity, you would have had to provide a mailing address when trying to sign up for an email account. So here’s a pro-tip to all current thinkers out there: if you want to build a service to replace email, don’t require the user to provide an email address when they signup.

Brooks’ argument relies on the notion that Facebook and Twitter (and the late Google Wave) are designed to replace email. I disagree entirely. Facebook and Twitter have messaging functions, but are clearly not intended to be full replacements for email[1]. Rather, these services are designed to augment email with features it doesn’t have, or that one wouldn’t necessarily want.

One cannot, for instance, change the priority of a tweet, or forward an entire Facebook conversation to another recipient. Likewise, you wouldn’t email someone to let them know about the awesome latte you’re having at the coffee shop on 19th and 1st.

This is certainly interesting. I love the concept, but am struggling to imagine how speedy everything will be, considering it’s transmitting 1080p video, data from up to four USB-connected gadgets and audio via a single USB port, wirelessly. USB 2.0 has a maximum bitrate of 480mbps, but an HDMI cable can transmit up to 10.2gbps. If 1080p video and audio could be transmitted reliably and beautifully over USB, why does HDMI exist?

Here’s the crux of the issue: you are essentially paying a premium for “specs” that you are likely to never use or notice. While at the same time forgoing things that you will notice every time you use the computer (screen resolution and the performance of an SSD).

Those Annoying “Rate this App!” Dialogs

The worst offender is Instagram. They display the “Rate this app” dialog once per new version, and they update the app frequently. I’ve already rated it on the App Store, so why is it asking that I do it again? Why is it reminding me when I update from 1.6.4 to 1.6.5. Does it think I forgot?

My Bag is Badass

My bag has been featured on the new “My Bag is Badass” site. It’s what I bring with me every day.

What’s the Point of Popular?

Popular is almost never a measure of impact, or genius, or art. Popular rarely correlates with guts, hard work or a willingness to lead (and be willing to be wrong along the way).

Good points. However, it’s worth noting that the converse is also not true. Something which is artistic, smart and revolutionary does not have to be unpopular for it to work. In fact, something which makes an impact almost has to be popular.

Things that are popular are not necessarily bad, or wrong, or unworthy of attention. Many people seem to make an attempt to differentiate themselves by deliberately listening to obscure music, creating blatantly offensive art and penning “difficult” poetry (or whatever). Strange is the new cool (but black is, and always will be, the new black).

I think I called this at some point. According to Apple’s online store:

If Twitter’s search worked better, I’d be able to find that tweet from when the 2010 MacBook Air launched, and people were predicting how the SSD technology would find its way into other Macs. At some point, I suggested that the SSD would be used primarily for system stuff, and storage would be on a traditional hard drive until flash memory prices dropped significantly. This is what Apple is doing, with a chipset from Intel that allows for a “hybrid” hard drive setup, split between two physical drives. Very clever.

Also, do yourself a favour and check out the new iMac website, which features some awesome parallax animation in the slideshow.

As I have posted/whined many times about the NY Times paywall, I figured I should repost this fantastic article, via Daring Fireball.

People pay for Business Class because they don’t want to be tortured in Economy. They get faster lanes at the terror check. They get an extra glass of champagne. The stewards are more attentive. They get off the plane more quickly. They get the feeling of a higher social status. […] What would a Business Class news site look like?

How the US Military Got Their Man

Of the five dead, one was a tall, bearded man with a bloodied face and a bullet in his head. A member of the Navy Seals snapped his picture with a camera and uploaded it to analysts who fed it into a facial recognition program. And just like that, history’s most expansive, expensive and exasperating manhunt was over.